Skip to content
We provide the only intuitive view of CPM schedules, while improving upon the definitions of both critical path and longest path. Our software uniquely targets both completion milestones and start activities and ensures the complete longest path of every activity is returned for ranking. This allows us to associate every dynamic impact to each discrete cause. We encourage you to analyze your schedule updates with our secure, no-obligation demo.

Industry definitions for critical path and longest path can cause confusion because they can be used interchangeably. Furthermore, the definition for critical path includes notable assumptions that make it ambiguous in practice. AACEi’s Recommended Practice 49R-06 defines the critical path of a schedule, similar to PMI’s PMBOK Guide, as “the longest logical path through the CPM network and consists of those activities that determine the shortest time for project completion” [1]. Both describe the critical path as the longest path that “determines the shortest possible project duration” [2], where a delay to an activity of the path will delay project completion.

These definitions assume there is only one critical path of a CPM network that spans the full duration, but schedules can have multiple critical paths as a result of any combination of four conditions:

AFS returns both critical and longest paths, but ranks longest above critical because of their unique forensic value in emphasizing start targets at the data date. Because more than just the first and last activity of a schedule are evaluated, we define longest path as the continuous chain between a specific set of activities having the lowest relationship free float. An activity set includes a start target that is either at the data date or constrained after the data date, specific evaluation activity, and finish target such as a contractual milestone. 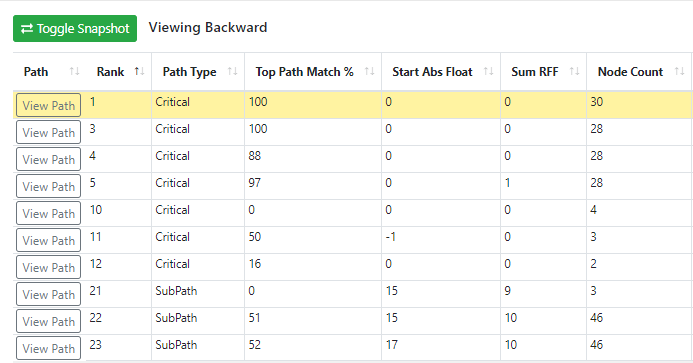 The longest path of an evaluation activity may not be its most critical path because the start and finish targets may exist beyond constraints that delineate path segments with higher total float. In these cases, AFS will return the critical path of the evaluation activity as a separate path where the interim constraints are defined as the start and/or finish targets. This allows analysts to compare critical paths alongside longest paths to better understand the effects of constraints.

In the AACEi paper, S.07: When is the Critical Path Not the Most Critical Path?, Mr. Woolf presents the following discussion: “Because we believe that the definition for the term, path, should make reference to the path’s point of terminus, as well as its point of origin, we are faced with this difficult question: Where does a path begin and end? If we cannot define a path’s starting or ending points, how can we begin to define the term, critical-path?” [3].

AFS compliments Mr. Woolf’s discussion by targeting both points of “origin” and “terminus”. This approach removes ambiguity by constructing both longest and critical paths with individual context and accurate, exhaustive ranking. AFS retains context of the data date and contractual milestones, fully exhibiting the practical difference between longest and critical paths.

[3] Woolf, M. (2008) When is the Critical Path Not the Most Critical Path? AACE International Transactions, PS.07.