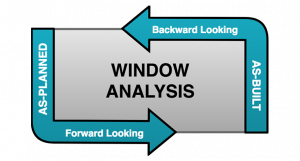 The ability to analyze concurrent causes and effects between schedule updates is integral for reducing claim settlement costs and controlling project risk. Of the four methods identified in AACE International’s Recommended Practice No. 29R-03, we regard the dynamic logic, observational method as the most untapped source for advancing forensic schedule analysis (FSA). (We define FSA as the retrospective analysis of CPM models to investigate series of causes and effects between project states.) The dynamic logic, observational method allows specialists to tell the story for each chapter of a project milestone, which is why FPM has chosen to place it at the core of our software’s interface.

Although the method is the most objective for apportioning delays, analysts struggle to achieve exhaustive results because it requires considerable effort to perform. Automation has solved this challenge by providing the best approach for defending against methods that require biased selection of events for additive simulations, while reducing effort by 90%. The dynamic logic, observational method is rather intuitive, and we encourage you to see just how natural this method is by reviewing your schedule updates with our secure, no-obligation demo. 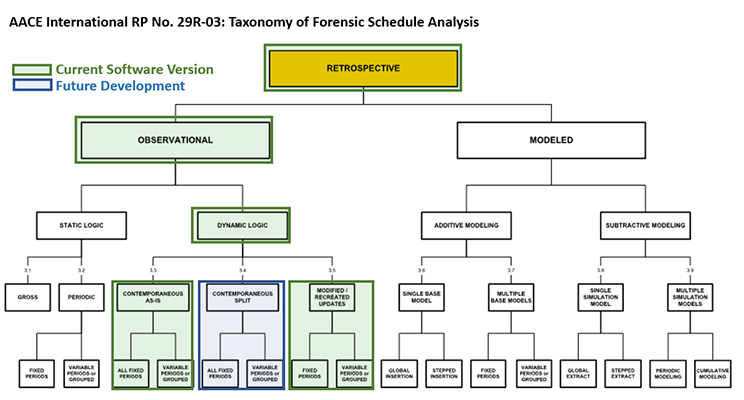 29R-03 opened the door for automation and software development by thoroughly organizing the four FSA methods into hierarchical classifications and providing guidelines without prescribing uniformed definitions or specific procedures. To avoid defining it ourselves, let’s step through each of the hierarchical layers for the dynamic logic, observational method. This will provide insight into why we believe it is the most effective forensic approach for both time-based disputes and project schedule management.

Analysis is retrospective when it occurs after impacting events are known (not necessarily after projects have completed). Retrospective analysis is advantageous in that it provides the “full benefit of hindsight” for investigating causes of schedule delays and reductions. 29R-03 states, “If as-built documentation is available, the best evidence rule demands that all factual investigations use the as-built as the primary source of analysis.” [1]

Observational methods include no intervention by experts to model what-if scenarios “beyond mere observation”. Any modifications should only improve upon the as-built quality of the schedule. To the extent it’s possible, the best forensic analysis uses as-is information prepared within the period of events being investigated. This ensures all related information includes time-appropriate context.

Dynamic logic methods observe shifting critical paths between schedule updates. The windows analysis technique, as explained below, exposes these shifts by comparing paths at the beginning of an analysis period to paths at the end of the period. These comparisons expose logic-based changes that cause schedule delays and reductions to contractual milestones. 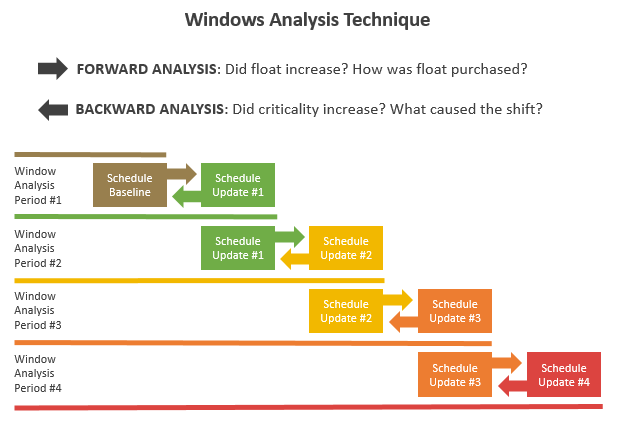 The windows analysis technique applies this method to forensically observe series of causes and effects through the life of a project. Our software automates this technique by exposing all shifts between concurrent paths within their ranked and logical context.

Windows analysis compares two project snapshots to evaluate schedule deviations over time, where a snapshot is represented by a schedule update or baseline. The technique begins by dividing the project duration into interim analysis periods, commonly referred to as windows. Each window is then framed by two schedule updates with data dates that correspond with the beginning or end of the analysis period. The update with the earlier data date is the forward snapshot and is structured at the beginning of the window, and the later update is the backward snapshot, structured at the end of the window.

The terms ‘as-planned’ and ‘as-built’ can be misleading in context of interim windows. They may suggest analysis is focused only on events between the data dates of the snapshots (i.e., events that were statused during the window period). All schedule changes between snapshots are equally relevant in a window analysis, including dynamic shifts on either side of the data date of the backward snapshot.

Windows analysis uniquely allows both snapshots to be used as a baseline against each other, providing both a forward-looking and backward-looking analysis:

Benefits of the Backward-Looking Analysis include:

Benefits of the Forward-Looking Analysis include:

Understanding the Unique Value of the Forward-Looking Analysis

The forward-looking analysis provides a very valuable, yet unconventional added benefit to FSA. The comparison of the forward snapshot against a future baseline relative to its data date allows for analysis that uniquely exposes schedule reductions and mitigations.

Schedule deviations are typically identified through a backward-looking analysis that compares a later schedule update to an earlier baseline, but backward-looking analyses are better for isolating delays than schedule reductions. Critical paths in the as-planned schedule often shift to become non-critical, falling out of the near-critical range in the as-built schedule. The only way to see these reduction shifts without reviewing a substantial number of paths is to perform a forward-looking analysis that shows how critical paths become less critical in a future baseline.

This is where our software really demonstrates its value. Without automation windows analysis can include only critical and near-critical paths at best. Our software includes the longest path of every activity to each contractual milestone, allowing us to pre-evaluate and prioritize all dynamic logic through a window, even when paths shift between criticality. 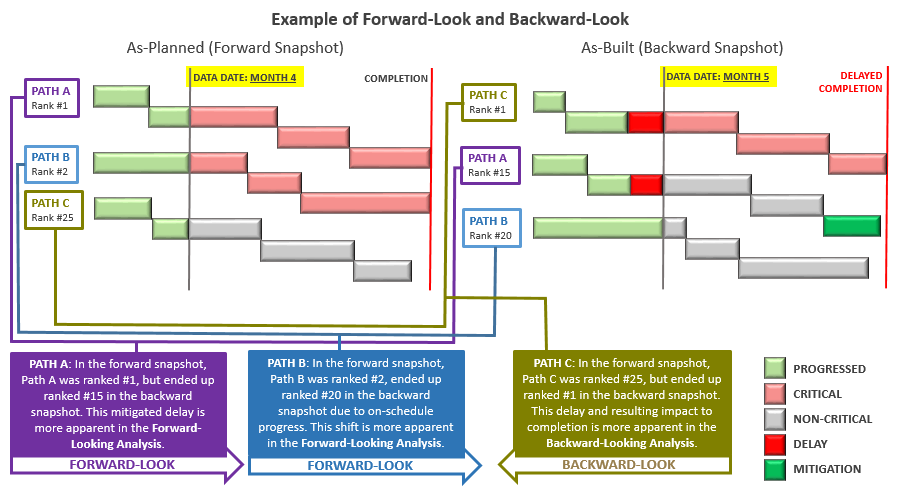 The incremental nature of the windows analysis technique exposes a pattern of events through each update period. Since paths often dynamically shift between schedule updates, FPM’s windows analysis provides logic-based investigation of every discrete schedule delay and reduction. Incremental deviations can then be accumulated through each update period to calculate net impacts to project milestones. This is why we say that the dynamic logic, observational method allows analysts to tell the unaltered story for each chapter of a project milestone, making it the most untapped source for advancing FSA.